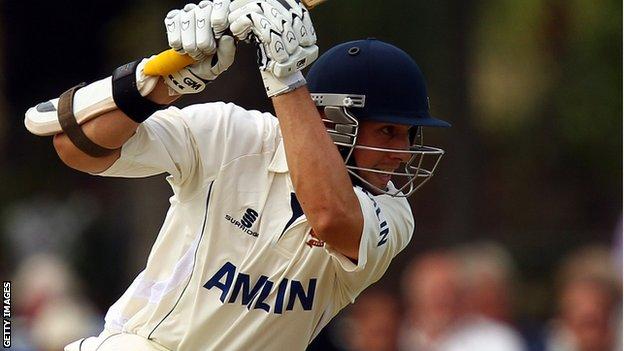 Essex head coach Paul Grayson has challenged Billy Godleman to fulfil his potential and take advantage of the absence of opener Alastair Cook.

With England international Cook unavailable until 2 May, Godleman, 23, stepped in to hit 130 against Gloucestershire last week.

"The last couple of seasons he's not got the runs he would have liked to," Grayson told BBC Essex.

"Hopefully he's going to kick on and have a very good season for us."

Cook, who has been named one of Wisden's five cricketers of the year, has been told by the England & Wales Cricket Board to rest after tours against Pakistan and Sri Lanka.

He will be available for Essex in two County Championship games and two CB40 matches in May.

Fellow England international Ravi Bopara is able to represent his county immediately and will feature against Yorkshire on 19 April, although the all-rounder will not be allowed to bowl in order to rest a side injury.

With Owais Shah and Ryan ten Doeschate away on Indian Premier League duty, Grayson is keen for Godleman, who has never amassed more than a single century in a domestic season, to step out of the shadows.

"You can put Jake Mickleburgh and Tom Westley into that bracket too," he said.

"Those three are very determined to show how good they are and I'm very confident all three will have very good seasons.

"Billy has worked hard in the last three or four weeks, has changed a few things in his technique over the winter and seems very comfortable and confident in his game.

"Making big scores at the top of the innings is something we've asked him to do. And that's exactly what he did."