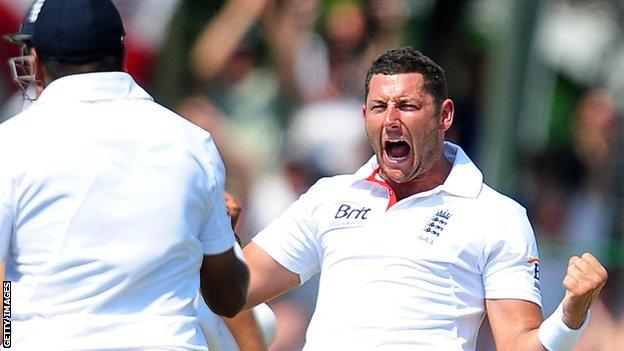 The editor of Wisden has labelled Tim Bresnan England's "lucky charm" after naming the Yorkshire bowler in their five cricketers of the year.

Lawrence Booth also praised the 27-year-old's performances in the 4-0 series win over India.

"If you look at his performances against India he took 16 wickets at an average of 16 and that's better than world class," he told BBC Radio Leeds.

Booth continued: "He was England's all-rounder in that India series. One great day at Trent Bridge he was out for 90 in the morning and then took five wickets in the afternoon and that's Flintoffesque."

The Wisden editor says that Bresnan is highly rated by the England selectors and coaches.

"The ball hits the bat harder than batsmen expect and he's got a great yorker and a very good bouncer.

"Bresnan is right up there and he's very highly thought of by the England set-up."

Meanwhile, Booth does not envisage Bresnan's county side spending too long in Division Two following their relegation last year.

"I'd be surprised if they don't go straight back up, they certainly have the quality.

"They've got a very talented bowling attack and there's some excellent young batsman too.

"They need to put the disappointment of last season behind them, if they do that then I think they've every chance of going straight back up," he concluded.