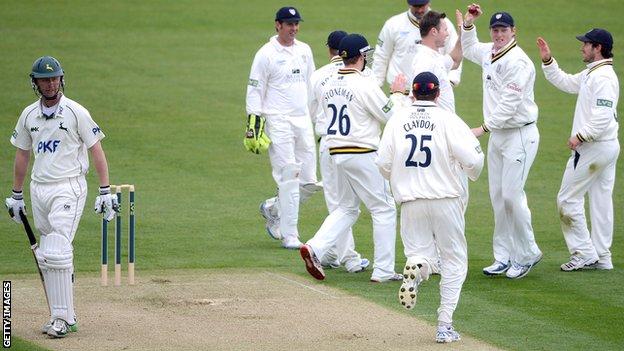 Graham Onions was the star as Durham had the better of Nottinghamshire.

Notts, who scored only were dismissed for 161 with England seamer Onions taking 4-42.

Adams, Nottinghamshire's top wicket-taker of the last two seasons, had both Will Smith and Mark Stoneman caught in the slips.

The latter came into the Durham team in place of Paul Collingwood, who has a virus.

Earlier, Onions was the standout performer with the ball, but Mitchell Claydon justified his inclusion ahead of Steve Harmison and Liam Plunket, by taking 3-33.

"Captains Phil Mustard and Chris Read resembled expectant fathers as they waited for the covers to be rolled back this morning.

"A wicket with a green tinge was revealed and crucially Durham won the toss, so Notts batted in difficult conditions.

"The temperature hovered around 6C and the threat of rain never seemed far away. It was more like winter than spring.

"Nottinghamshire's 161 all out gave Durham a major boost but, by the close, it was honours even as they lost three quick wickets.

"It's a hard one to call and Notts will certainly feel after a poor day with the bat their bowlers have kept them in this one."