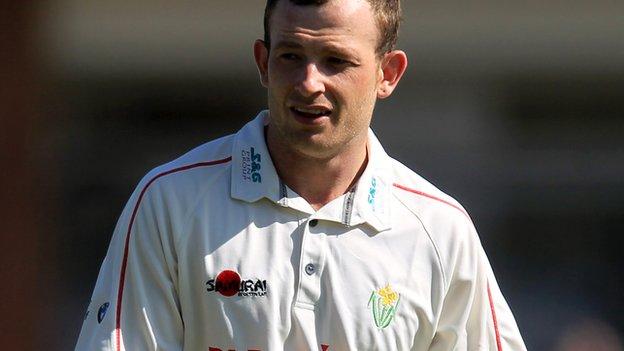 Glamorgan's Graham Wagg produced a fine performance against his old side Derbyshire on day one in Cardiff.

Derbyshire were 44-5 before a much-needed sixth-wicket partnership of 48.

However, Glamorgan made a terrible start to their reply as Gareth Rees, Stewart Walters, William Bragg and Ben Wright were out with the hosts on 37-4.

Tony Palladino took two wickets, while Jonathan Clare and Mark Footitt chipped in with one each.

"The batsmen on both sides struggled as the seamers took advantage of the early-season conditions.

"Graham Wagg, bowling against his former county took 6-44, his best figures for Glamorgan, who then struggled when it was their turn to bat.

"It was the same story around the country as the wickets tumbled and batsmen failed to adapt to the cold conditions."