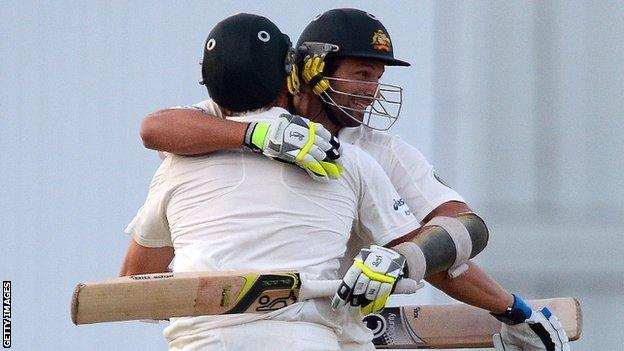 Australia beat West Indies by three wickets on the final day of a dramatic first Test in Bridgetown.

Chasing a victory target of 192 in two sessions, the tourists snuck home in fading light following a nervy chase that was led by Shane Watson's 52.

"That was one of the hardest Test matches I've played in my short career," said man-of-the-match Ryan Harris, who took five wickets in the match and scored 68 not out in Australia's first innings.

We dominated a top side with some good players and the way I heard them celebrating on the balcony, we'll take that to heart

"To win a game like that after they batted for two days, it's pretty amazing."

West Indies skipper Darren Sammy said: "We dominated a top side with some good players and the way I heard them celebrating on the balcony means a lot to me.

"We'll take that to heart and look to come back strong in Trinidad."

West Indies were in complete control after posting a first-innings total of 449 before reducing Australia to 285-8 on a chaotic fourth day.

But Harris' maiden Test half-century sparked the recovery, allowing Clarke to declare 43 runs short and insert West Indies with the momentum going against them.

It proved a masterstroke as Hilfenhaus turned the game further with three wickets in six balls before Harris (3-31) mopped up the tail on Wednesday morning.

That left his batsmen with 192 to secure victory but a painfully slow West Indies over-rate and some unhurried Australia batting threatened to deny Clark's men a fifth successive Test win.

They reached tea at 61-1, with Ed Cowan inching to 11 from 61 balls, as Australia sought to set the stage for late fireworks.

Watson stepped up a gear after tea but when he became Deonarine's first victim, pulling a long hop to backward square leg, Australia started to show signs of nerves.

Deonarine removed Cowan, Ricky Ponting and Clarke in the space of 14 runs to give the hosts a scent of victory at 140-5.

But Hussey calmed the ship, clattering two sixes in his knock only to fall with his side three runs short of the target when bowled by Kemar Roach.

However, Hilfenhaus scrambled the winning run soon after to give Australia a 1-0 lead in the three-match series.