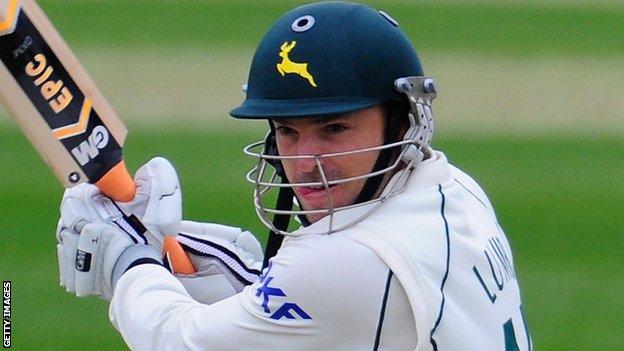 Earlier, Durham lost seven wickets for 74 runs in 22 overs in the morning session and were all out for 129.

Ben Phillips (4-33) and Andy Carter (3-27) were particularly impressive, while Andre Adams finished with 3-42.

Callum Thorp made an unbeaten 30 from 27 balls for Durham, while Ben Stokes was their top scorer with 33.

A three-over spell of 3-11 from Phillips was key for Notts, as the former Somerset man got rid of Stokes, Ian Blackwell and Phil Mustard in successive overs.

"Notts have proved there are no demons on this pitch.

"Sensible batting has given them a good lead of 263 at Chester-le-Street thanks to Lumb and Hales. It's theirs to lose now.

"It was Lumb's first century since he hit 158 for Hampshire at Basingstoke - against Durham - in August 2010."

"There aren't too many more satisfying things in professional sport than seeing someone bounce back from a serious injury.

"Michael Lumb has missed so much cricket over the last 18 months and underwent surgery on his injured ankle in the winter.

"Notts, having begun the day slightly behind, have turned things around by winning all three sessions, and should be able to turn an overall lead of 263 into a match-winning one by the end of their second innings."