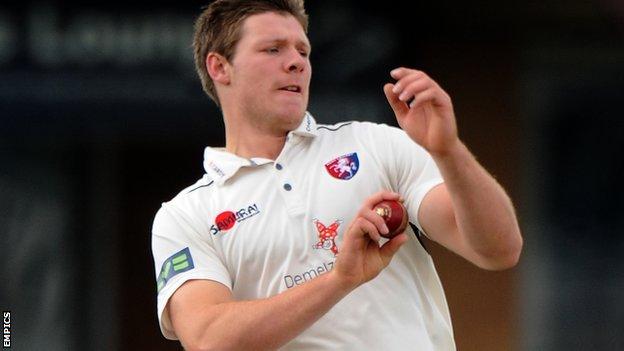 Matt Coles continued his fine start to the season by bowling Kent to a victory inside three days against Northants.

Coles, who hit an unbeaten 103 against Yorkshire last week, took six Northants wickets in the second innings to end with impressive match figures of 9-83.

Northants began the final day on 50-4 but their hopes of avoiding an innings defeat ended when captain David Sales was bowled by Coles after scoring 42.

Niall O'Brien ended unbeaten on 25 as the hosts were dismissed for only 116.

Northants have now lost heavily in both of their opening County Championship matches after they were thrashed by 202 runs against Derbyshire in their first game of the season.

"Everybody is pretty pleased, I don't know the relative strengths of a lot of the teams we face.

"I'm just happy with the way we've started and the quality of the cricket has been very good.

"I'm quite happy to see the returns spread across the squad, long may that continue.

"The lads played brilliantly, good bowling first innings, a match-winning partnership between Powell and Jones set it up and the bowlers did a good job today."