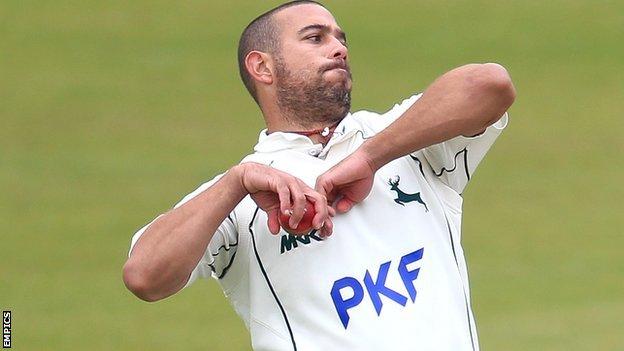 Andre Adams bowled Nottinghamshire to the brink of victory against Durham.

Durham were set 368 to win but the task quickly looked impossible as Adams claimed three of the first five wickets as the hosts slumped to a dismal 30-5.

Phil Mustard hit 80 before he fell to Adams, although a resilient last-wicket partnership saw Durham end on 203-9 to ensure there would be action on Sunday.

"Nottinghamshire moved to the brink of their second straight victory with another ruthless bowling performance, led by the irrepressible Andre Adams.

"Two wickets in his first over set the tone and sped Durham to an already-disastrous 30-5.

"The lower order, marshalled by the excellent Mustard, extended the contest into a fourth day though, with Onions and Claydon batting through the final five overs of the extra half an hour, with play ending at exactly 7.28pm."