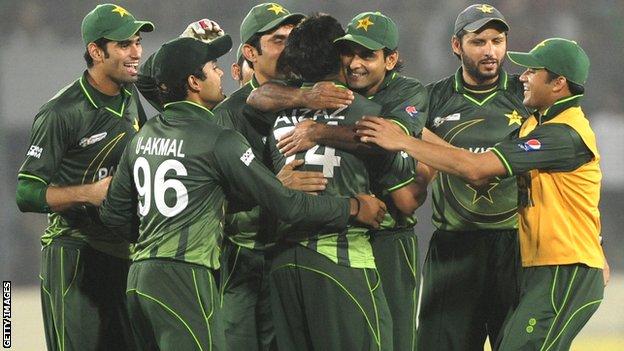 Pakistan will host its first international matches since 2009 when Bangladesh tour at the end of April.

The country has been off-limits since March 2009, when Sri Lankan cricketers and officials were attacked by gunmen.

Lahore will host a one-day international on 29 April and a Twenty20 match 24 hours later.

"The public of Pakistan have been deprived of cricket and we felt that we needed to support them," said Bangladesh official Mustafa Kamal.

The Bangladesh Cricket Board president added: "The reception we received when we toured Lahore and Karachi on our security visit was overwhelming."

During the 2009 attack on the Sri Lanka team six policemen and the team coach driver were killed, while seven cricketers and an assistant coach were injured.

In December, the Pakistan Cricket Board expressed confidence that international cricket would return to the country in 2012.

All of Pakistan's 27 Tests and 67 one-day internationals since the terror attacks have been played on foreign soil.

The UAE has served as Pakistan's temporary home, and played host to England earlier this year, while Lord's and Headingley were the venues for two Tests against Australia in 2010.