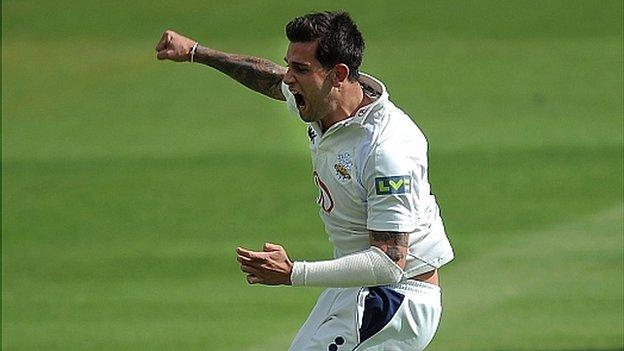 I wasn't at Lord's on Sunday for the climax of Surrey's County Championship thriller with Middlesex, but I managed to catch the last few overs on BBC Radio 5 live sports extra.

They chose a great game to kick off their new live commentary service, although from a Surrey point of view it was very disappointing to see us miss out on a second straight victory at the start of the season by three runs.

It was a low-scoring match and the Lord's surface certainly proved a tricky one to bat on with, at times, some excessive sideways movement.

"Our emphatic FA Cup semi-final victory over Spurs was a huge result at the start of a huge week featuring clashes against Barcelona and Arsenal. I was behind the goal where Juan Mata 'scored', and my initial reaction was that it didn't go over the line. But whether the goal should or shouldn't have been awarded, it simply underlined the fact that goal-line technology is a must. Through not having it you are cheating the fans and the game of football."

But that is inevitable at this time of year, with the wet weather at the start of April ensuring there is plenty of moisture in the pitches up and down the country.

For seam bowlers, it's a dream and it was no surprise to see the likes of Tim Murtagh and Jon Lewis enjoying great success with their experience and accuracy.

But when the ball moves around in the air, batting becomes very hard work. It means you have to take the odd calculated risk and you know at times you will get a ball with your name written all over it.

With conditions as they are, bowlers have predictably been on top in the first two rounds of championship matches this season.

So, it's been all the more impressive to see the likes of Michael Lumb (Notts), Mike Yardy (Sussex) and Riki Wessels (Notts) knuckle down and score impressive hundreds.

Among the bowlers, I was very impressed by Sussex seamer Steve Magoffin's match-winning seven-wicket haul against champions Lancashire.

And Graham Onions' six wickets for Durham in a losing cause against leaders Nottinghamshire showed he is ready to push strongly for an England recall this summer.

From a Surrey point of view, it is clearly going to be much tougher to win games in Division One than it was in Division Two last season.

It's a much higher quality and more intense level of cricket and every game is going to be a tough battle.

There will be home games that you will mark out as ones you hope to win but there won't be any nailed-on bankers before a ball has been bowled.

"The debate over the Bahrain Grand Prix has parallels with the situation we faced in deciding whether to play in Zimbabwe during the 2003 World Cup. It's always difficult when sport and politics mix and the key question is always whether a sporting boycott can really affect the way governments and dictators run their countries"

With the Championship shaping up to be a fascinating battle, the biggest frustration for fans will be the lack of continuity in the fixture list.

For a variety of reasons, including the London Olympics, Surrey do not have a single home championship game at the Oval between 23 May and 15 August.

On the flip side, there is a crazy period in the first week of July when they play three home Twenty20 matches - against major rivals Sussex, Kent and Middlesex - in the space of four days.

We're not giving the fans a sensible fixture list where they can look forward and build up to matches, and we are also asking them to put their hands in their pockets far too regularly.

Everyone is suffering - the quality of the cricket, the fans who can't afford to go, and the counties who suffer losses in revenue when they can't sell seats.

I know the England & Wales Cricket Board are looking at changing this, but the sooner they get a better structure whereby every championship game starts on the same day, and one-day and Twenty20 games have regular slots, the better.