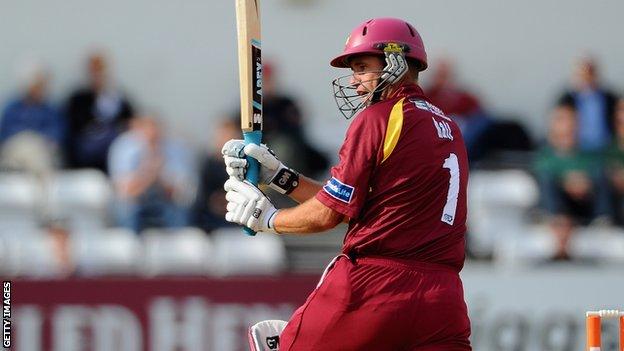 Northants captain Andrew Hall has insisted promotion in the County Championship is still possible despite his team's poor start to the campaign.

The former South Africa all-rounder watched from the sidelines with a calf injury as Northants suffered heavy defeats against Derbyshire and Kent.

But he claims it does not automatically condemn the club to a ninth successive season in the second division.

"The guys have to work hard and get mentally tougher. After the last game, we had a chat and all of us felt the same - we didn't bat, bowl or field well enough to compete."

"Over the last couple of seasons, the teams who've been promoted have tended to win between eight and ten matches out of 16.

"The main thing for us is when we get in a position to win matches, we must see it through.

"We can't end up like last year when we drew games we should have won. That's not going to help us."

Hall was full of praise, though, for fast bowler Jack Brooks, who claimed 12 wickets in the first two Championship fixtures.

"Jack has been brilliant," said Hall. "He came back from the England Lions tour looking fit and strong and we could see he'd played plenty of cricket in the winter.

"Hopefully we can get the kind of performances we had from him last year right through this season - and not lose him at the back end because of injury."

Hall himself is confident of being fit for Northants' next Championship match against Essex, which starts on 26 April.