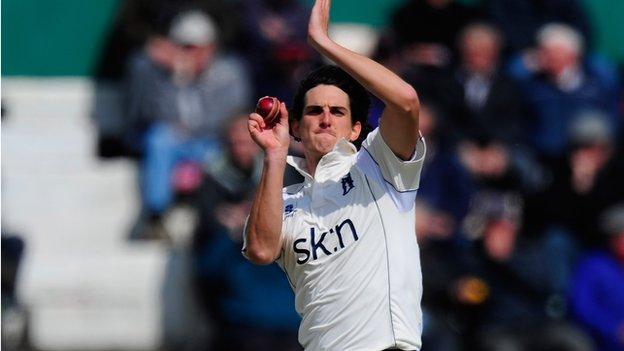 Karl Brown's stubborn 46 from 105 balls looked to have guided the hosts into a decent position, before they stumbled late in the day.

Wright took the wicket of the resilient Brown to finish with figures of 1-27.

Play finally got underway at 1345 BST and Stephen Moore was given a life with the opening ball the day after he was bowled by Keith Barker, only to be saved by one of three no-balls from the former Blackburn and Rochdale footballer.

But the left-armer gained revenge thanks to a stunning one-handed low catch by Rikki Clarke in the slips.

Horton was the second wicket to fall, trapped lbw by Clarke's medium pace, to leave the score at 77-2.

A fourth interruption, this time for bad light, brought play to an early end, with 41 overs lost in the day.

"On a day when rain prevented any play in the morning and hail was bouncing off the outfield at one stage, we did well to get over a half day of cricket.

"In the end, Warwickshire will be quite happy despite not getting the early wickets they would have hoped for after winning the toss.

"Darren Maddy was the pick of the bowlers and may have been unlucky not to have more than two wickets. He thought two LBW shouts were "closer than close".