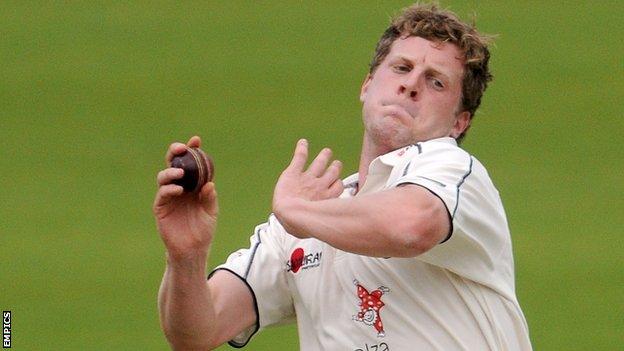 Glamorgan's woeful start to the season continued as they struggled on a rain-affected opening day against Hampshire.

The hosts batted first and declared on 103-9 with William Bragg (45) the only player to end with a respectable score.

Hampshire's David Balcombe (5-33) was the pick of the bowlers, before the visitors reached 29-1 in their reply.

Glamorgan have now failed to take a single batting point from their three matches and already face a battle to avoid their third successive defeat.

"Glamorgan have not beaten Hampshire in Cardiff since 1985 and the visitors' bowlers put their team in pole position by the end of the first day.

"Will Bragg, who scored 45, was the only top-order batsman not to struggle against a steady, but by no means lethal Hampshire attack.

"Glamorgan will hope the bowlers, who have performed adequately this season, can fight back on the second day.

"But it appears inevitable that Hampshire will gain a sizeable lead in first innings. These are fairly desperate days for Glamorgan - this after just two and a half weeks of the new season."