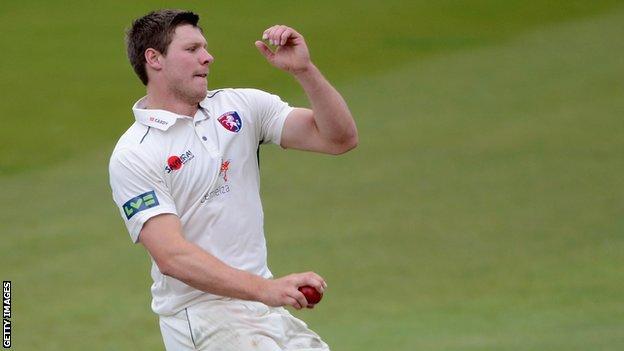 Kent seamer Matt Coles continued his good early-season form to take three wickets and put Gloucestershire on the back foot on a rain-affected first day.

The hosts offered some resistance through a sixth-wicket partnership of 57 from Will Gidman and Ian Cockbain.

But in a short period of play between rain breaks, Cockbain was lbw to Ryan Davies to leave the visitors 131-6.

"A good toss for Kent skipper Rob Key to win on the first morning. Gloucestershire struggled with the variable bounce of a drying pitch and the nagging accuracy of Kent's seam attack.

"Chief among them was Matt Coles, who seems to have added a yard of pace over the winter and bowled better the longer he was left on, but Mark Davies and Charlie Shreck never let the batsmen settle either.

"Gloucestershire will take some heart from Benny Howell's performance on his debut. He has a glorious cover drive in his armoury and looked the pick of the batsmen.

"The rain looks set to interrupt this game throughout the four days, the victors will likely be the side who keeps their concentration best."