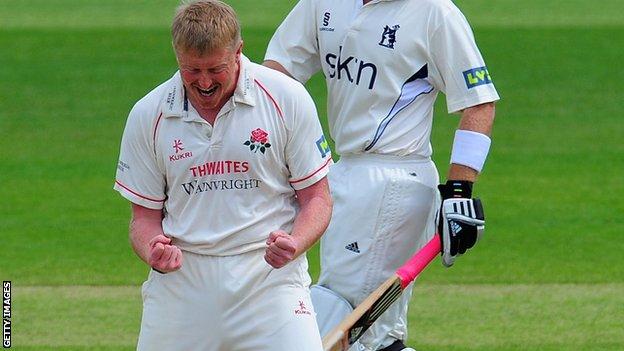 A fine Glen Chapple display put Lancashire in control against Warwickshire on day two at Aigburth.

Chapple smashed 44 from 49 balls before taking take two wickets, including the key wicket of Ian Bell for just 18.

Lancashire began on 125-5 and Chapple and Luke Procter helped the hosts to 250 before both men were dismissed by Darren Maddy, who claimed four wickets.

Warwickshire made a slow start and ended on 68-5 after Chapple dismissed both Varun Chopra and England man Bell.

It was a slow start to the day, with the visitors securing eight consecutive maidens.

But Chapple and Procter put on 50 in the nick of time, while Bears' bowlers Maddy (4-39) and Chris Wright (3-49) claimed seven wickets between them.

The Bears pair will now have to prove their worth with the bat after a shaky start to the first innings by the visitors.

Chapple dismissed Varun Chopra (0) four balls into the innings, before seeing off Bell, who was playing in an attempt to get some runs ahead of the first Test against West Indies in May.

Maddy remains on 16 not out overnight, while Wright has failed to get off the mark from 18 balls.

"The saying 'it all went to plan' could have been invented for a day like this.

"Lancashire played superbly. They were careful and cautious in the morning session including eight consecutive maiden overs to start the day and build a platform for them to accelerate after lunch.

"Built around a solid innings from Luke Procter, who has made an impressive start to the season, and a breezy innings from Glen Chapple, the Red Rose secured not only a second batting bonus point but also a sizable first innings total of 250.

"They then backed it up with some fine bowling, led as ever by the captain who also nicked out Ian Bell, who found it hard going in difficult conditions. Kyle Hogg and spinners Simon Kerrigan and Gary Keedy offered him support.