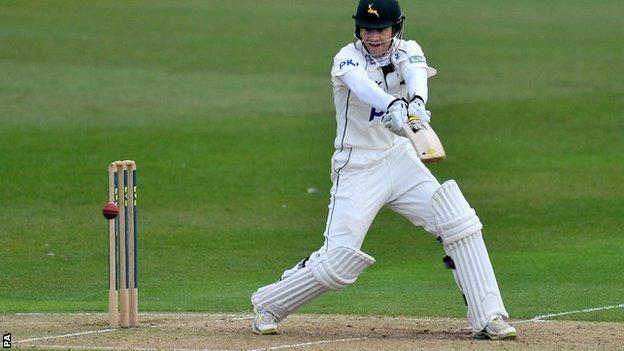 Nottinghamshire captain Chris Read hit an unbeaten century to ensure his side were not completely overrun by Somerset on day two at Trent Bridge.

Somerset were deprived of the services of Marcus Trescothick after he was carried off with an ankle injury.

Without him, they reached 78-1 before rain forced an early close, with Arul Suppiah unbeaten on 50.

Suppiah survived a controversial moment when on 19 as Samit Patel, fielding at third slip, claimed a catch off Gurney, but the umpires ruled that the ball had bounced.

Somerset had earlier lost Lewis Gregory, opening the batting in place of Trescothick, bowled by Ben Phillips as the ball nipped back.

Nevertheless, Somerset look well-placed to earn a first-innings lead, despite the efforts of Read who hit 15 fours and two sixes in contributing 64% of his side's total.

With the hosts resuming on 93-6, Peter Trego completed a five-wicket haul and Steve Kirby removed Luke Fletcher to leave the hosts nine down, before Read took over.