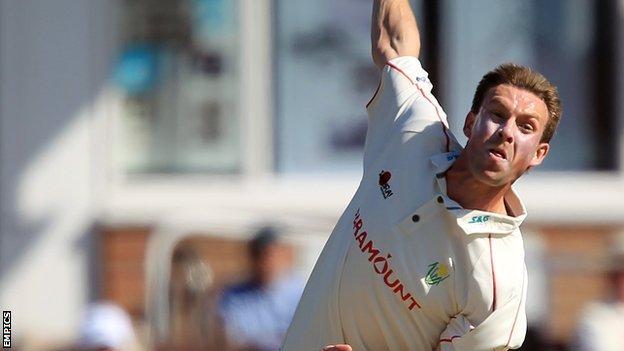 Glamorgan's Huw Waters claimed the best bowling figures of his career, although his side still ended the day fighting to avoid defeat against Hampshire.

Waters took 7-53 as the visitors were restricted to 156 after Glamorgan had declared on 103-9 on Thursday.

Hampshire began the day on 29-1 but no batsman managed to score more than 40, with Liam Dawson top scoring on 32.

Glamorgan ended on 73-3 and only have a narrow advantage of 20 with seven second-innings wickets remaining.

"Huw Waters, Glamorgan's 25-year-old opening bowler, took a career best 7-53 in Hampshire's first innings but Glamorgan have a lead of 20 over.

"Glamorgan's bowlers again performed admirably but they badly need support from their batsmen, who are yet to score 200 in an innings this season.

"Waters' performance was all the more praiseworthy as he played only three Championship games last season because of a bad back."