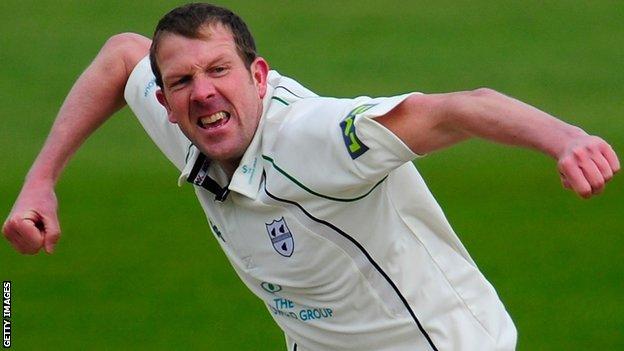 Worcestershire's Alan Richardson maintained his fine start to the season as he took five wickets on a rain-affected second day against Surrey.

After day one was washed out, Richardson (5-42) took his second five-wicket haul in two matches.

Ramprakash was out after for only one as his miserable run continued.

Things could have been worse for Surrey as they were 69-5 before a sixth-wicket partnership of 53 between Tom Maynard (34) and Chris Jordan (20).

However, immediately after a rain delay, Richardson quickly dismissed both men to leave the hosts in trouble.

Richardson, who was nominated as one of Wisden's five cricketers of the year last week, has now taken 12 wickets in two games after match-figures of 7-123 against Nottinghamshire earlier this month.

"Nice to get some cricket to talk about and a strange old day it was with most of the Surrey batmen appearing to be in one-day mode.

"There was 48 on the board after 13 overs with Roy smashing it until Alan Richardson found his length,

"Worcestershire director of cricket Steve Rhodes says the veteran can't take another 70 plus wickets in a season, but the way he's started, who knows?

"Richard Jones got it in the right place from the start but Maynard was in belligerent mood, until Richardson trapped him in a rare break between the showers.

"Lord knows what a good score is on this pitch in these conditions, or why we are playing at this time of year."