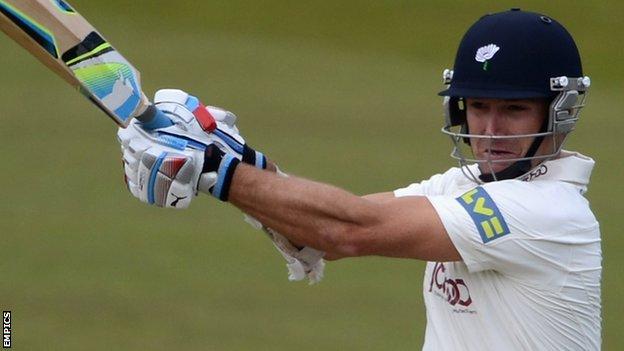 Phil Jaques hit a century before Yorkshire's seamers ripped through the Essex top order to give the home side the upper hand at Headingley.

After day one was lost to rain, Jaques, beginning his second spell with the Tykes, crashed 126.

However, Yorkshire lost their last seven wickets for 43 to be bowled out for 246, Tymal Mills taking 4-62.

But Steve Patterson and Ryan Sidebottom tore into the Essex batting, leaving them 72-5, with Ravi Bopara 26 not out.

Sidebottom removed Billy Godleman and Tom Westley, before Patterson accounted for Alviro Petersen, Adam Wheater and Greg Smith as the visitors slumped to 42-5.

However, Bopara, looking to impress the England selectors, combined with captain James Foster to take Essex to the close.

The Australian, playing the first game of his second spell for the Tykes after obtaining a British passport, hit 21 fours and a six, before becoming the eighth wicket to fall as the hosts collapsed.