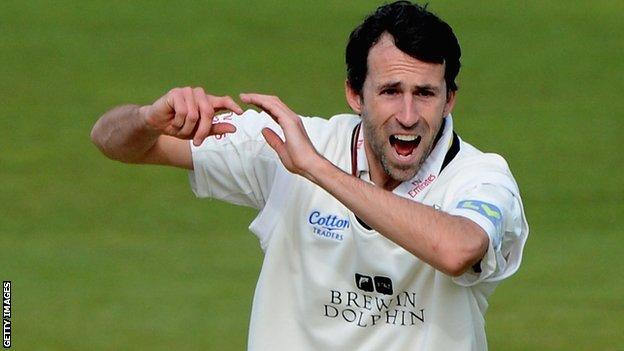 Onions took 6-45 as the hosts were reduced to 188 all out in the first innings and then bowled England captain Strauss for only six late in the day.

Middlesex resumed on 132-5 but Neil Dexter did not add to his score of 65.

Durham were all out for 238 with Ben Stokes hitting 45 and Steven Finn and Gareth Berg each taking three wickets before Middlesex ended the day on 21-1.

Strauss, who was playing in the hope of scoring some runs ahead of the first Test against West Indies in May, had been dismissed for a second-ball duck in the first innings.

Middlesex trail by 29 runs, although a draw looks the most likely outcome on Sunday.

"Graham Onions was the star of the show again as he picked up the wicket of Andrew Strauss for the second time in the match.

"Onions nipped the ball back to take the inside edge and bowl the England Test captain having already had him dropped on 0 by Callum Thorp at gully. That would have sealed a pair for Strauss.

"Onions had already smashed five boundaries in a last-wicket stand that helped Durham to a 50-run first innings lead which heaped pressure onto Middlesex.

"The forecast for the final day is mixed and the hosts will hope for assistance from the elements or they'll have to bat for at least two sessions to save the game."