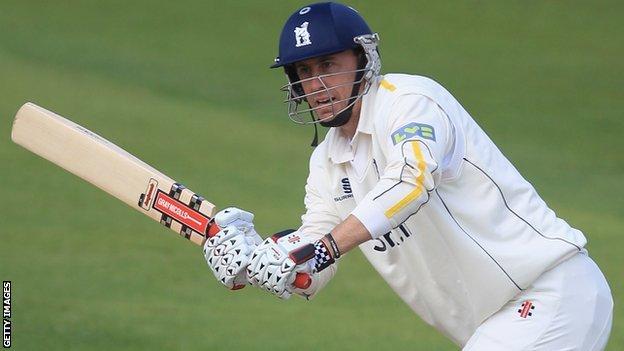 Warwickshire looked in trouble at the start of the day on 68-5 but Clarke hit 140 and Darren Maddy 112 as they shared 224 for the eighth wicket.

The hosts made a miserable start to their second innings as Keith Barker dismissed all of the top three before Lancashire ended the day on 44-4.

Lancashire, who suffered a 10-wicket thrashing at the hands of Sussex in the first match of their title defence, still trail by 35 runs with six wickets remaining.

They will be relying on Ashwell Prince (5 not out) on Sunday after Stephen Moore (3), Paul Horton (14), Karl Brown (9) and Steven Croft (10) were all dismissed late on Saturday evening.

Warwickshire began the day staring at the prospect of being made to follow on as Simon Kerrigan (4-89) struck twice to leave them 81-7.

But thanks to the partnership between Maddy and Clarke they will begin the final day in control and hopeful of forcing victory.

"How quickly things can change. Lancashire find themselves on the ropes having been in a position of real strength they go into day four with plenty of work to do in order to avoid a second successive defeat.

"At one stage, when Simon Kerrigan picked up two early wickets, the Red Rose could sense a follow-on and with it a win.

"But they didn't bargain for a sensational eighth-wicket partnership which might have gone a long way to winning the game.

"Lancashire came through countless difficult positions last season, ultimately it was the mark of champions. They'll have to go some way to rescue this one."

"Warwickshire must hope the weather on Sunday is as accommodating as it was on Saturday in order to close out a notable victory.

"There was a distinct possibility they could have lost in three days when their seventh wicket fell with 20 runs still needed to avoid following on.

"But Rikki Clarke batted as smoothly as he ever has for Warwickshire and Darren Maddy defied an injured thumb - their huge partnership deflated Lancashire, and Keith Barker took advantage with three wickets.

"With Jeetan Patel able to turn the ball sharply, Warwickshire could force a quick win, but will need the elements to allow them enough time."