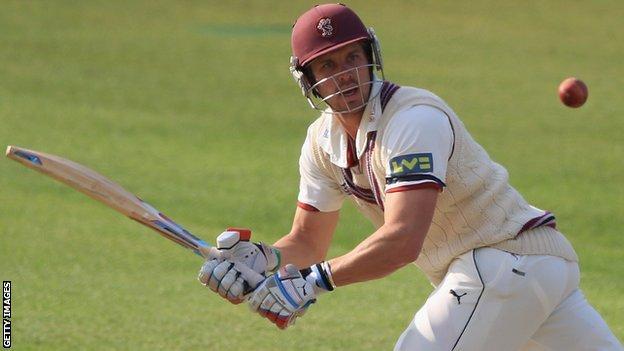 Nick Compton continued his sensational start to the season as he hit an unbeaten 204 as Somerset dominated on the third day against Nottinghamshire.

Compton, who had also scored 133 and 99 this month, was in stunning form and was well supported by Arul Suppiah (124) and James Hildreth (102 not out).

Notts reached 47-0 but will have to bat throughout Sunday to avoid a defeat.

Alex Hales and Neil Edwards are both unbeaten on 22 apiece after surviving 12 overs to ensure the hosts avoided losing any late wickets on Saturday evening.

Somerset's efforts saw them take maximum batting and bowling points, while Notts, who won their first two league matches of the season, will fail to pick up a point, unless they can force a draw on the fourth day.

Compton had also scored 236 in a first-class match against Cardiff MCCU at the end of March and an unbeaten 100 in a pre-season friendly against Glamorgan.