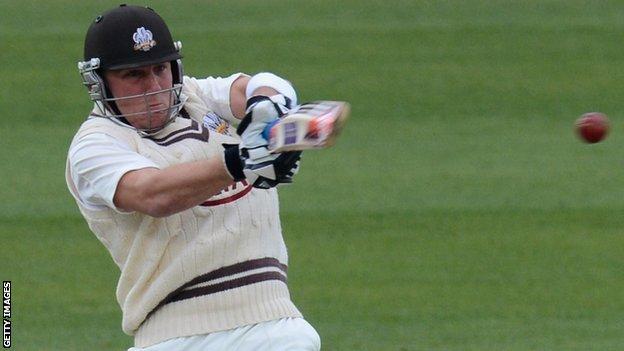 A half-century from Surrey captain Rory Hamilton-Brown kept alive his side's hopes of a win against Worcestershire.

Hamilton-Brown hit an unbeaten 55 off of 55 balls as Surrey ended the third day on 131-6 in their second innings, a lead of 152 going into the final day.

Surrey's Stuart Meaker took 6-39 but his side were then in trouble on 59-5 before Hamilton-Brown's fine innings.

"Good bowling and some poor batting have meant a possible conclusion despite half the game being lost to the weather.

"Richardson was yet again the hero for Worcestershire, but some of the Surrey men, Maynard in particular, might reflect on their shot selection.

"Cameron was again belligerent for Worcestershire and Jones again proved no mug with the bat. Meaker certainly looks the part for Surrey.

"Chasing 175 in the last innings would be sizeable on a pitch where the bounce is pretty unreliable, Ramprakash getting one that did not bounce at all."