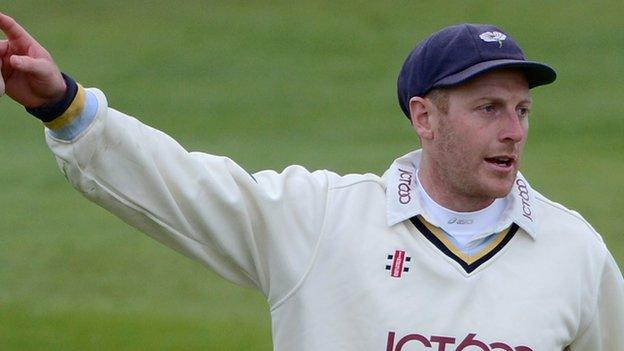 Yorkshire captain Andrew Gale has praised Phil Jaques after his century in the draw with Essex.

The Australian hit 126 in his first innings for the county since returning for a second spell at Headingley.

"It was a fabulous innings. He scored at a fast rate and if we can build around him that'll help our batting points a lot," he told BBC Radio Leeds.

"His record speaks for itself in England and around the world, he's a brilliant addition to the team."

Yorkshire made an attack-minded declaration on the final day but the weather hindered any chance they had of registering their first win of the season.

But Gale took the positives from the match, his side's second successive draw in the County Championship.

"I felt from the start of the match that we drove this game and it was a pretty bold declaration," he added.

"If the weather hadn't intervened I think we would have had a very good chance of winning that match.

"I thought we won most sessions and even the one where we collapsed and lost eight wickets I still thought we could take positives from that."

Yorkshire travel to Kent, who they drew their opening match with, on Thursday.