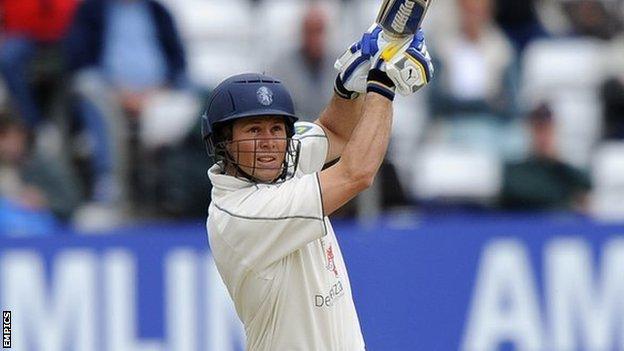 Kent wicket-keeper Geraint Jones says he is happy to leave the decision on where he bats in the order to others.

In 2009, the former England keeper scored almost 1,300 runs batting at number three but he has started this season at seven.

"I'll bat wherever it's best for the team, as long as I'm getting a game," Jones told BBC Radio Kent.

"My most successful period was at three and I enjoyed that, but things have changed and I'm in the middle order."

He added: "I had a good partnership with Mike Powell at Northants which went a long way towards winning the game. It's a position I'm used to, it's where I started my career and I will bat wherever I'm asked to."

Ben Harmison has batted at number three so far this season having replaced youngster Sam Northeast, who is waiting to make his first appearance of the season for the first team, but has already made a century for the second 11.

Jones has been encouraged by Kent's start, which consists of an innings victory and two draws, and he praised the bowlers' performances so far.

"The whites are relatively clean so far, it's good," he joked. "The one thing (coach) Jimmy Adams set out is he has wanted one line for the bowlers to bowl and the lengths to be decided by the wicket.

"The way Matt Coles has bowled, he's been the outstanding performer. As a unit they have been outstanding, as batters we have to back them up and as a catching unit we have to take the chances they are creating.

"Going into the game against Yorkshire, we have got to learn from the way we played against Gloucestershire because they have got some good bowlers."

There is commentary of Kent v Yorkshire from Thursday 26 April on bbc.co.uk/kent