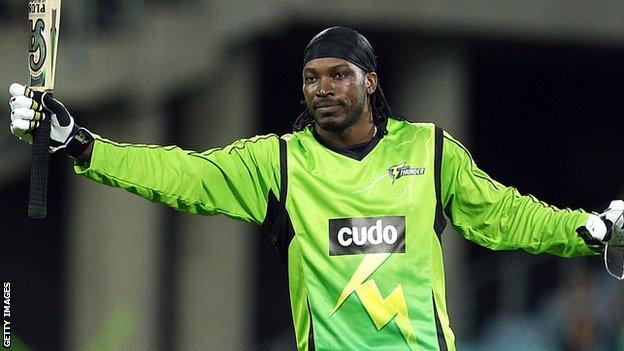 Somerset are still waiting to hear if Chris Gayle will be able to play in their Twenty20 campaign this summer.

The 32-year-old was expected to arrive in June as their overseas player, after agreeing a deal in January.

However, following a reconciliation with the West Indies cricket board after an earlier fall out, reports in the Caribbean suggest he could now be involved in their summer tour.

"I'm certainly hoping that within the next three to four days I'd get some sort of conclusive statement from the player or the West Indies board.

"I don't know what they are going to do, to be honest. I'm keeping my fingers and legs crossed at the moment, which I'm sure the public are as well."

Somerset's recruitment of overseas players for this season has been a protracted process.

They had looked at bringing back Roelof van der Merwe for the entire season, but problems with a work permit meant the South African was unable to return to Taunton for a second term.

Instead, the county signed Gayle and South Africa all-rounder Albie Morkel for the T20 campaign and brought in Morkel's team-mate Vernon Philander for the first half of the County Championship season.

Meanwhile, Somerset have confirmed that pace bowler Steve Kirby has been ruled out for at least four weeks with the torn quad muscle he sustained during the draw with Nottinghamshire.