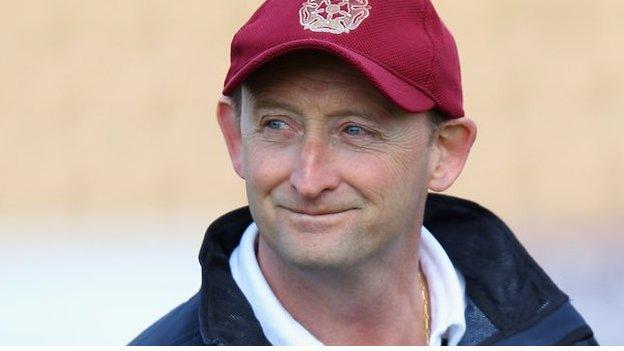 Northants head coach David Capel has warned his players it is time they started performing to their potential.

After being among the favourites for promotion from Division Two, Northants have lost their first two matches.

Capel told BBC Radio Northampton: "It's about where you finish, not how you start, but the players know we can't keep giving them opportunities if they are not successful.

"We don't want to get into a situation when we are playing catch-up cricket."

After losing to Derbyshire by 202 runs in their opening fixture, Northants were thrashed by an innings and 120 runs by Kent to leave them propping up the table. Now they face a tough match against Essex in Chelmsford, starting on Thursday.

"I've never known going to play Essex to be an easy proposition in all my years in cricket, but I've been pleased with the way the players have responded in training," said Capel.

"We're only two matches into the season and OK, they've both been defeats, but we've had a real get-together and a real think about how we want to be moving forward, and I believe opportunities should still go to the 12 who've been involved so far.

"In recent years Worcestershire and Surrey have both begun seasons poorly and been in the bottom part of the division but gone on to win promotion."

Northants are hoping captain Andrew Hall, who missed the opening fixtures with a calf problem, will be fit to face Essex, but the experienced all-rounder remains a doubt.

"Andrew is in the squad but has been feeling some stiffness in his calf and we need to make sure he's OK before we announce the side," said Capel.