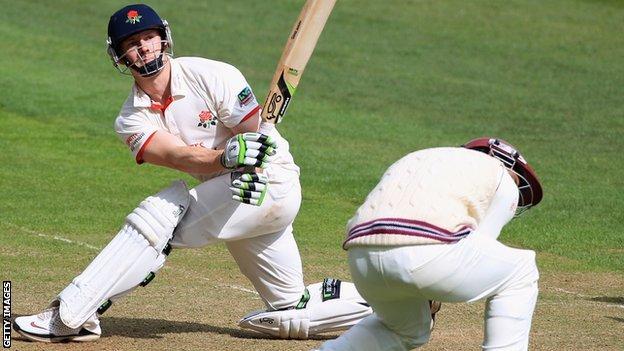 Steven Croft scored an unbeaten century as Lancashire dominated Somerset with the bat on the opening day at Taunton.

Croft (113 not out), who hit 11 fours and two sixes in his fifth first-class hundred, shared a 208-run fourth-wicket partnership with Ashwell Prince (96).

Karl Brown (50) and Stephen Moore (47) also contributed, while Lewis Gregory, Vernon Philander and Peter Trego also picked up a wicket each for Somerset.

After electing to bat, Lancashire lost a wicket to the fifth ball of the day as Paul Horton was trapped lbw to South Africa Test star Philander with only two runs on the board.

But a Somerset attack lacking Steve Kirby, Adam Dibble and Gemaal Hussain through injury, and Alfonso Thomas, who is playing in the Indian Premier League, was soon exposed.

Moore and Brown put on 95 inside 25 overs before the latter was beaten by Gregory's quicker ball and pinned leg before.

The visitors went to lunch on 118-2 and lost their third wicket immediately on the resumption, as Moore played defensively down the wrong line and was lbw to Trego.

But from then on Croft, who scored the winning runs on the same ground to seal Lancashire's title win last season, and Prince took the Somerset attack apart, helping themselves to 208 runs in just over 49 overs at a rate of of 4.23.

The partnership was eventually broken when Prince pulled Overton's short ball to Nick Compton at mid-wicket.

"So Steven Croft and Ashwell Prince popped up and hit 208 for the fourth wicket. Timely.

"Prince left the pitch understandably disappointed to fall four runs short but, with plenty of batting to come, that partnership could prove to be the platform Lancashire need to win the game."