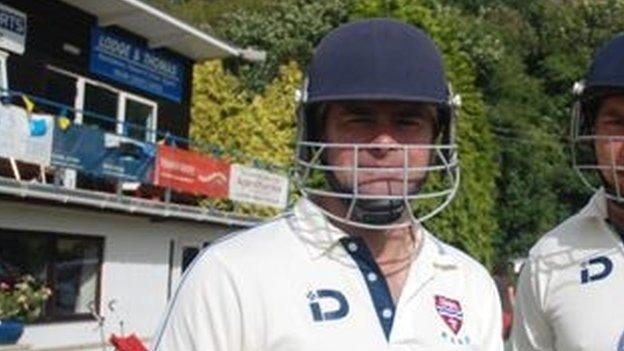 Herefordshire went down by 20 runs under the Duckworth/Lewis method in their opening MCCA Trophy group match against Cumberland at Eastnor.

"We twice lost two wickets in as many balls, which made things quite difficult," he said.

"We'd set ourselves up well but we kept on losing wickets at the wrong time in the middle of the innings."

The home side won the toss and put Cumberland in to bat on a damp green wicket, a decision fully vindicated when the visitors were reduced to 32-4.

But Andy Atkinson (53) and Chris Thompson (40) put Cumberland back on track as they eventually reached 174-7 in 46 overs, following which there was a rain delay of 90 minutes.

After the game was reduced to 46 overs per side, the Duckworth/Lewis calculation left Herefordshire requiring 185 to win.

Herefordshire lost two early wickets before a partnership of 66 between Ben Stebbings (35) and Boroughs (39) put them in with a chance.

But Boroughs felt their departure in quick succession was to prove crucial as they were bowled out for 154 in 38.5 overs.

"The partnership between myself and Ben had us on track but we got out within two balls of each other," he said.

"This meant that it was very difficult for the guys who were coming in after us.

"All in all, it was a case of 'good effort but could have done better', and it showed that it was early season and batsmen have not had a lot of time in the middle," he added.

Herefordshire now have to regroup before taking on Cambridgeshire in their next group match at The Leys School in Cambridge this Sunday (29 April).