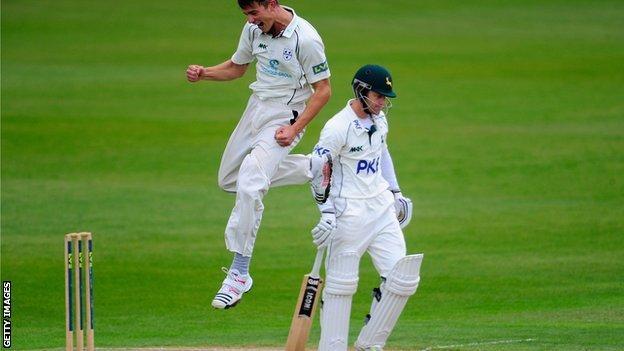 Richard Jones and Aneesh Kapil led a Worcestershire fightback on day one against Nottinghamshire.

Worcestershire closed on 5-0, trailing by 238 runs.

After three sub-200 totals in their opening three games of the season, Notts began well and made it to an early lunch without losing a wicket.

But the afternoon session began with two quick wickets, James Cameron held a low chance when Neil Edwards (23) whipped a ball from Alan Richardson (2-23) off his legs and Daryl Mitchell took a good catch at second slip as Hales attempted to force Jones off the back foot.

Notts continued to make errors, Michael Lumb (17) chopped on and Samit Patel carved Richardson to wide gully where Michael Klinger took a catch above his head.

Taylor and Read took Notts to the brink of their first batting bonus point of the season, but from 193-4 Notts stumbled to 194-6 as the pair fell in quick succession.

Andre Adams hit two sixes in making 21 off 17 balls, before Jones soon wrapped up the innings getting rid of Luke Fletcher for a second-ball duck.

Worcestershire then had time to make five without loss in five overs.

"A good fightback by Worcestershire, but one or two Notts batsmen will rue the shots they played to get out.

"Kapil ran in with enthusiasm but will bowl better and not take any wickets and Jones stuck to the task after the Notts openers had done well in difficult conditions.

"The biggest surprise of the day was how we got a full day's cricket in after the weather forecast predicted heavy rain for most of the day."

"Despite picking up their first batting point of the summer, Notts again under-performed, wasting the opportunity of building on a terrific platform.

"The top seven in the order all scored at least 17, with Alex Hales' 49 the top score. Too many got starts but could not go on, something that will deeply concern Mick Newell.

"The bowling attack has bailed out the batters on too many occasions to mention, and will be asked to do so again on the second day as Worcestershire begin their reply."