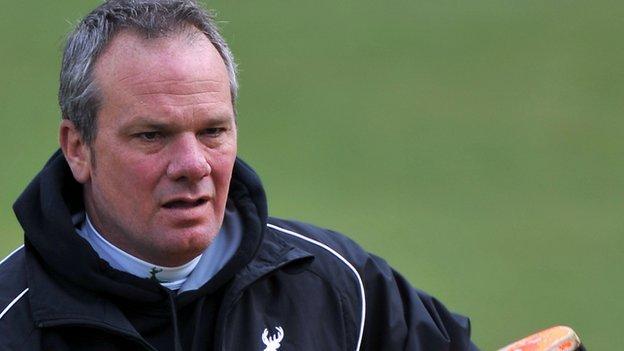 Nottinghamshire director of cricket Mick Newell says he is not fazed by his side's early-season batting struggles.

Notts have won two of their first three County Championship fixtures so far this season but a new-look top order has not yet found its best form.

"I would rather have two wins rather than a whole posse of batting points," Newell told BBC Radio Nottingham.

"We'll be alright. It's just difficult batting in April and May with the ball moving around."

Notts beat Worcestershire and Durham in their first two games.

But Newell, whose side begin their next game against Worcestershire on Thursday, added: "We need to be a little tighter in our technique and a little bit more patient.

"We seem to play at 100 miles an hour. A lot of our players have been playing white-ball cricket all through the winter and I think there is a mentality of trying to score off every ball and not leave the ball, which is crucial at Trent Bridge.

"This is quite a new group of players. Alex Hales and James Taylor are only 22, 23 and this is Michael Lumb's first season so there are a new group of batsmen in the team.

"I just think we need to adapt, be patient and bat for long periods of time.

"James is just starting to make contributions in the the 30s. He has three scores in the last two games which is good sign for him. He will get lots of runs over the course of the season. I have no doubts about that."

Newell added: "It's important we have already won two games at this time of year with the weather being around and pitches not that easy to bat on. We have to be happy with two wins already.

"By the time we have played Middlesex, and that finishes on the 12th of May, then I think that's six games that will have gone.

"We don't appear to play as well through July and August but we need to put that right this year.

"Where we are by the end of May will be quite important will tell us where we are and what our opportunities are in the second half of the season."