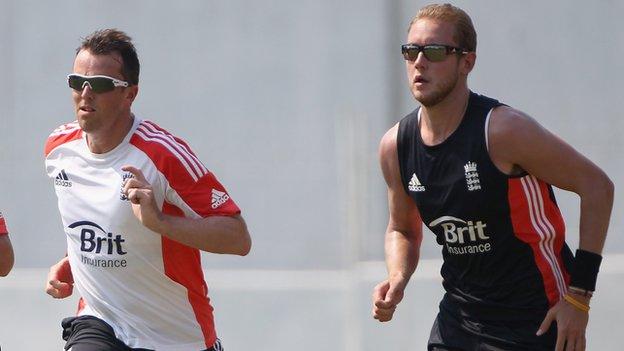 England bowlers Stuart Broad and Graeme Swann are poised to make their return for Nottinghamshire this week.

The game against Lancashire at Old Trafford will be Broad's first since recovering from a calf strain suffered on England's tour of Sri Lanka.

Broad, 25, flew home after sustaining the injury during the first Test defeat in Colombo in March.

The duo could also play against Middlesex next week in preparation for England's series against West Indies.

"Graeme is ready to play and will slot straight in but Stuart hasn't had any competitive cricket for a month," said Notts director of cricket Mick Newell.

"We all know what they are capable of and they need to use these games to prepare for a big summer of international cricket."

The first Test of the three-match series against West Indies is at Lord's, beginning on 17 May.

The second Test, at Trent Bridge, starts on 25 May, with the series concluding at Edgbaston from 7 June.

England then play the tourists in three one-day internationals with Broad set to captain the world champions in the sole Twenty20 game at Trent Bridge on 24 June.

Paceman James Anderson is in the Lancashire squad for his first domestic appearance of the season, while elsewhere, opener Alastair Cook will line up for Essex against Glamorgan.