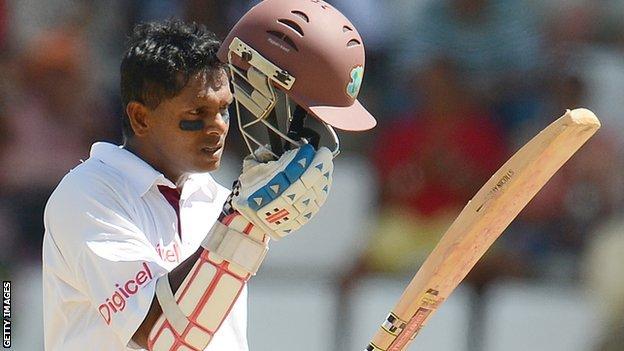 The Guyanese left-hander, 37, joined former team-mate Brian Lara in reaching the milestone when he scored his 14th run in the second innings of the third Test against Australia in Dominica.

Chanderpaul is only the 10th batsman in history to pass the 10,000 mark.

"It felt really good to reach this milestone," he said. "I have been batting well and spending a lot of time at the crease and to reach 10,000 Test runs is something special for me.

"It was one of the goals I set myself and I believe I have reaped the reward for the hard work I put in over the years."

Now playing his 140th Test, having made his debut against England in his native Guyana in 1994, Chanderpaul has often had to shoulder the burden of carrying a West Indies batting line-up that has struggled to match the feats of their 1970s and 1980s predecessors.

Nicknamed "The Crab" because of his unorthodox batting stance and reputation as a man difficult to dislodge from the crease, he is likely to once again play a key role when West Indies' tour of England begins next month.

However, his dismissal to Clarke's part-time left-arm spin leaves Australia as favourites to wrap up victory - and clinch the three-Test series 2-0 - when play resumes on Friday.

"Whenever you talk to Shiv and ask for advice he is willing 100%, each and every time," said team-mate Darren Bravo.

"We're very fortunate to have him in this team and we enjoy his company.

"He's going to be around for a very long time still, he's scored lots of runs and as young batsmen we should try to take a page from Shiv's book as much as possible. As long as we do, we're going to improve as a batting unit in the future."