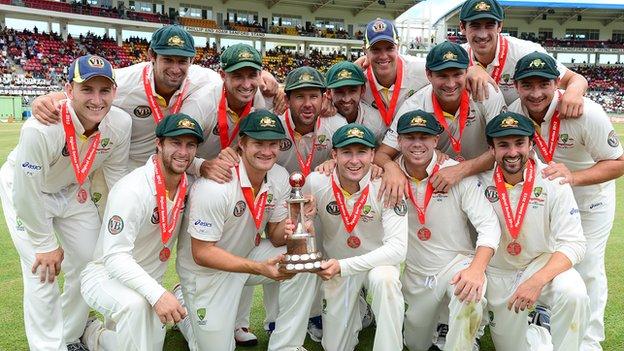 Australia wrapped up a 75-run victory over West Indies on day five of the third and final Test in Dominica to win the series 2-0.

Australia were held up by a last-wicket stand of 49 between Darren Sammy (61) and Shane Shillingford, before Nathan Lyon had Sammy caught by Ryan Harris.

The Windies next face England in a three-Test series beginning on 17 May.

In a match where 27 wickets fell to spin bowling, West Indies' last hope looked to have gone on the fourth evening when Shivnarine Chanderpaul, after passing 10,000 Test runs, was lbw to Clarke.

The Australia skipper struck again early on the fourth morning, catching Narsingh Deonarine off his own bowling, and, from there, any West Indian resistance only delayed the inevitable.

As in the first and second Tests, the hosts will feel they wasted a strong position earlier in the match, wicketkeeper Michael Wade's maiden century allowing the tourists to recover in their first innings from 169-7 to 328 all out.

After that, apart from the late defiance of Sammy and Shillingford, only Chanderpaul offered any real resistance with the bat, top-scoring in both innings for the hosts.

Following the departure of Deonarine, Lyon (3-87) removed Carlton Baugh, possibly for last time in Test cricket after he was dropped for the tour of England, and Kemar Roach, before Clarke completed his second Test five-wicket haul by having Ravi Rampaul caught at mid-on.

Sammy and Shillingford (31) prolonged the match with some entertaining strokeplay, the home skipper reaching his highest Test score before sweeping Lyon into the hands of Harris at short fine leg.