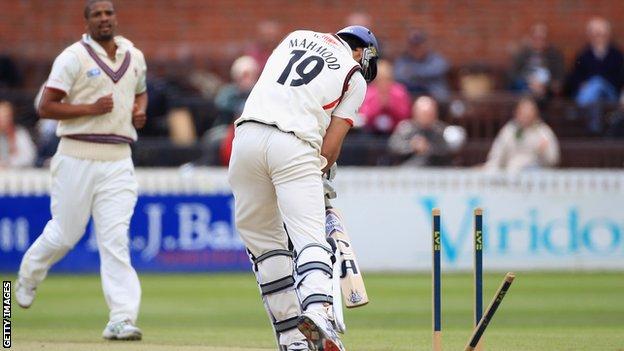 Vernon Philander showed why he has emerged as a potent performer in Test cricket by leading a Somerset fightback against Lancashire at Taunton.

Only 21 overs were possible on day two because of rain, but the home side managed to pick up five wickets.

Philander took 3-6 in an eight-over spell for overall figures of 4-70 and his victims included Steven Croft, who was caught behind for 113.

Having reached 363-4 on the opening day, and with Croft still there, the defending champions were looking to press on and pick up their maximum haul of batting bonus points.

But Philander, who took only seven Tests to reach 50 wickets for South Africa, soon checked their progress by inducing an edge from Gareth Cross and Craig Kieswetter dived to his right to take the catch.

Luke Proctor followed to an even better catch by Kieswetter in the next over, bowled by Peter Trego, and the keeper claimed his third catch in quick succession as Croft departed without adding to his overnight score.

Saj Mahmood was beaten all ends up by a straight one from Philander which knocked out his middle stump and although Lancashire skipper Glen Chapple hung around for 20, he was then caught at slip off Irish spinner George Dockrell.

With their final pair of Kyle Hogg and Simon Kerrigan together, the Red Rose county were still five runs short of their fifth bonus point when the whether forced the teams from the field.