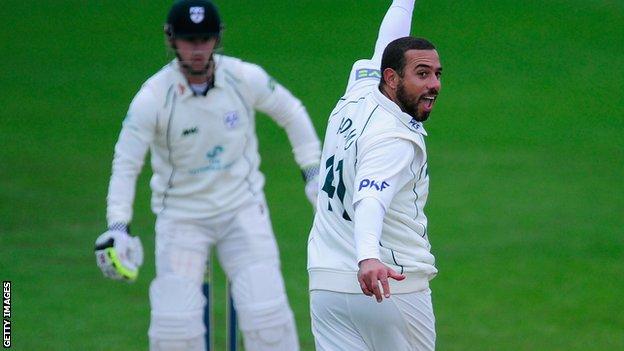 Home skipper Daryl Mitchell (24) and Alex Kervezee fell in the same over and Adams also picked up the wickets of Michael Klinger (22) and Moeen Ali.

Overnight rain meant no play was possible until mid-afternoon and when Worcestershire's batsmen finally reached the middle, they had to contend with seamer-friendly conditions.

Mitchell and Klinger saw the score to 35-0 before the latter edge Adams to Samit Patel at slip and Vikram Solanki quickly followed when he was leg-before the Ben Phillips for one.

Mitchell also fell lbw, this time to Adams and Kervezee's duck was his third in four innings.

Moeen got under way with a couple of boundaries but he was adjudged lbw for 11 to a ball from Adams delivered from round the wicket which appeared to keep a little low and Ben Scott also fell victim to the raised finger, with Harry Gurney the successful bowler.

"On a dull, dark, damp afternoon at New Road, the last man you want to see running in with the ball in hand is Andre Adams, and he used the conditions superbly to wreck Worcestershire.

"Adams moved the ball both ways, when play surprisingly got underway on a damp and soggy outfield.

"But one or two of the Worcestershire batsmen looked short of form, especially Alex Kervezee, and they have not earned a batting bonus point as yet this season."