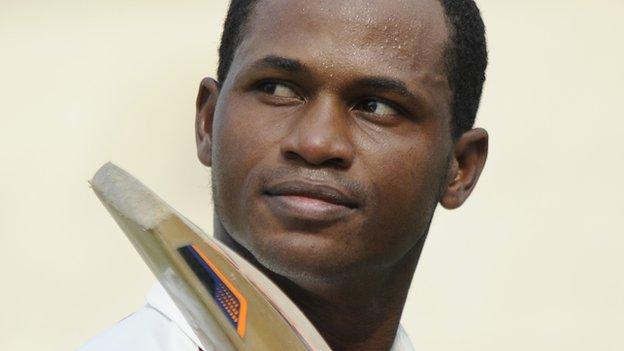 They replace Kraigg Brathwaite and Carlton Baugh, who have been dropped after the 2-0 defeat by Australia.

Chris Gayle is not selected because of his Indian Premier League commitments, but could feature in the limited-overs matches after reportedly reaching an agreement with the West Indies board.

The three-Test series begins at Lord's on 17 May.

The Windies, who will be captained by Darren Sammy, also play Tests at Trent Bridge and Edgbaston before moving on to three one-day internationals and one Twenty20.

Dwayne Bravo, Andre Russell and Sunil Narine are not available for selection because of the IPL but could appear, along with limited-overs specialist Kieron Pollard, later in the summer.

Shane Shillingford, who impressed on his recall against Australia, is the only frontline spinner, selected ahead of Devendra Bishoo.

West Indies Cricket Board chairman of selectors Clyde Butts said: "Bishoo has done well for West Indies in the last year or so, but he has lost some of his confidence and the selectors feel playing him in the A team will give him the chance to regain that confidence. We also feel this way about Kraigg Brathwaite

"Baugh has been good behind the stumps, but his batting has not quite lived up to expectations, hence the selection of Ramdin.

"We are going to England early in the season, where the conditions tend to favour the quick bowlers more than the spinners.

"Young Gabriel continues to impress the selectors in both regional and A-team cricket, and we feel it is a good time to introduce him to the team. We feel he will be an asset to the team in England and has a bright future in West Indies cricket."