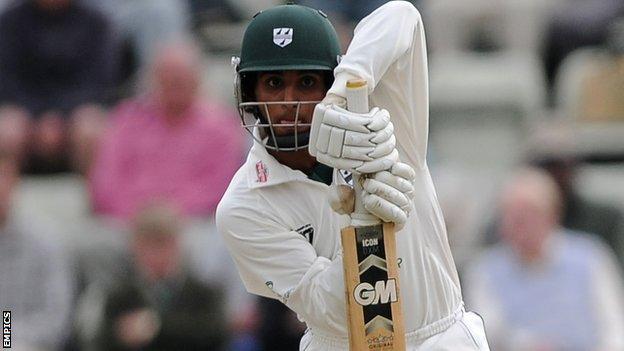 Nottinghamshire built a lead of 174 at gloomy New Road after Worcestershire avoided the threat of following on.

Resuming on 72-6, still needing 22 to avoid being asked to bat again, Aneesh Kapil (41) helped the home side reach 157, their best first innings knock in three pointless attempts this season.

Andre Adams claimed one more success, trapping Kapil lbw to finish with a return of 5-62.

Nottinghamshire then reached 88-2 in their second innings.

Kapil's stylish innings was some reward for the small crowd who braved the wet, miserable conditions.

Only a fortnight after playing for England's Under-19s in a quadrangular tournament in Australia, the talented teenager adjusted to a drop of at least 20 degrees since leaving the warmth of Queensland.

Highly rated as an all-rounder, after taking three wickets in Nottinghamshire's first innings, the Wolverhampton-born 18-year-old underlined his capabilities as an attacking lower-order batsman.

"It is amazing that we got so much cricket, and also that it took Andre Adams two spells to take a five-for, having had four in the bag overnight, Harry Gurney upstaging him with three wickets.

"Anish Kapil continued to play with freedom and, with the obdurate Cameron, took Worcestershire past the follow-on and indeed onto their highest score in a first innings this season.

"On and off in the afternoon, and no Alan Richardson on the field for Worcestershire due to a side strain, but Notts have a good lead."