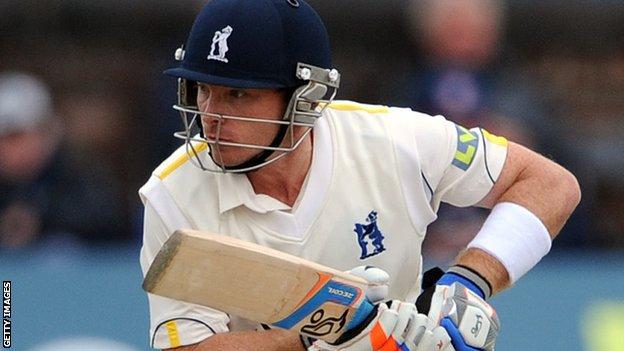 England batsman Ian Bell believes that he is "just one knock away from it all turning round" after an indifferent start to the domestic season.

Having struggled for form in the two winter series for England against Pakistan and Sri Lanka, Bell has managed just 34 runs in three innings for Warwickshire this season.

And he admits he could do finding some form ahead of the first Test in May.

"It's just a matter of getting time in the middle," Bell told BBC Sport.

"We've all been in these positions before and you're just one knock away from it all turning round.

Hopefully this isn't just a short-term thing. Ashley Giles has tried to get involved a lot of young English players and stay away from Kolpak players

"It's been a tricky little period these last couple of months but, if I keep believing and keep doing the right things and keep training hard, then it will turn around again.

"You can practise and net and keep all the good habits that I've been doing over the last two or three years."

Bell and his England colleague Jonathan Trott, who scored a century in the Bears' rain-ruined draw against Sussex at Hove, are both due to turn out in this week's Championship match against Durham at Edgbaston, starting on Wednesday.

That will be their last chance to impress before the international summer gets underway with the first Test against West Indies starting at Lord's on 17 May.

They are part of a buoyant Bears side sitting on top of the table, thanks to winning their first two matches before last week's rain-affected draw at Hove.

And Bell acknowledges the strength in depth of the Bears' bowling department.

"In a way, it's probably been a bit of a blessing in disguise to have our best bowlers being out," he told BBC WM.

"It has let two other guys step up and they've done the business.

"It's great. If we keep getting first innings runs we've got an attack that can take 20 wickets."

Durham pulled off a Championship double over Warwickshire last season, but Bell is hopeful that can be put right.

"They're a good side," he said. "And they have been a very good first division side for a long time.

"But our group is in a confident mood and it's a good team to be involved in at the minute.

"Hopefully this isn't just a short-term thing. Ashley Giles has tried to get involved a lot of young English players and stay away from Kolpak players.

"That's hopefully going to serve us well for the future."