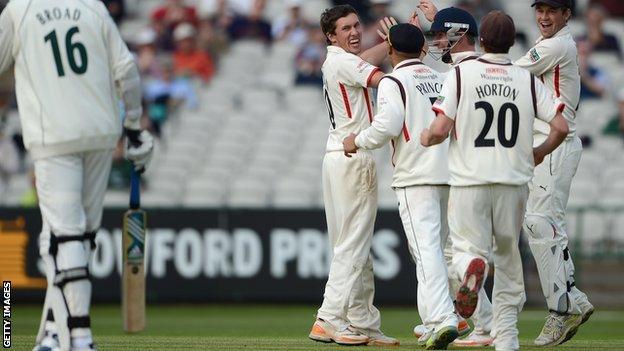 Glen Chapple and Simon Kerrigan bowled Lancashire into a strong position against Nottinghamshire.

After Notts slid to 83-5 Samit Patel, who was ninth out for 69, steadied the ship, but lost Stuart Broad to a golden duck and Graeme Swann for five.

Andre Adams took the wicket of Paul Horton for 24, while Stephen Moore ended unbeaten on 23.

It was a dramatic day as County Championship cricket returned to Old Trafford for the first time since 2010.

Anderson, who was wicketless but bowled tightly going for 23 runs off 17 overs, was taken to hospital after sustaining two blows to his right thumb in the morning session.

X-rays revealed bruising instead of the feared fracture, before he returned to the field in the final session.

Fortunes were less good for Anderson's England team-mates Broad and Swann, who both risked dissent charges.

Broad initially refused to walk and, after being given out, went down the track to converse with Steven Croft, who took the catch off Kerrigan, and umpire Stephen Gale.

Swann cut the hat-trick ball for four but was given out lbw to Kerrigan in his first over back.

Gale was again left in little doubt about the batsman's feelings about the decision, as Swann eventually trudged off having looked tellingly at his bat.

It was a better day for Patel, whose half-century came off 149 balls, but he fell soon after hitting the first six of the match.

"An eventful day's cricket at Old Trafford which started with some fans arriving early to watch the likes of Stuart Broad and Graeme Swann netting.

"It ended with most staying late to enjoy Stephen Moore and Paul Horton knocking them around the park for runs putting on 48 for the first wicket.

"James Anderson was terrific but his captain Glen Chapple again stole the show. Lancashire have so far enjoyed their first Championship game at Old Trafford since 2010, they'll be hoping day two follows suit."

"The much-anticipated clash between the 2010 champions and the reigning title holders firmly went the way of the home side.

"Chris Read, winning his first toss of the season, felt that the surface was much dryer than any his side had played on this season and relished the opportunity of making Lancashire bat last with Swann and Patel in his side.

"Notts need to bowl really well on the second day and try and restrict the Red Rose to a manageable first-innings lead - a tough task on what we've seen so far."