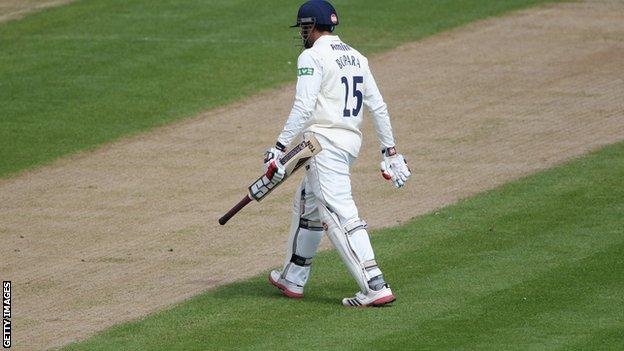 Cook made nine and Bopara was out for a third-ball duck as the visitors stumbled to 65-4.

Glamorgan then faced three overs and closed on 1-0, trailing by 258 runs.

"After leaving Glamorgan in controversial circumstances last winter their former captain Alviro Petersen came back to score 145 on his return to the Swalec Stadium.

"Petersen rescued Essex after they had been reduced to 65-4 and shared a partnership of 181 with Mark Pettini, once a student at nearby Cardiff UCCE.

"Glamorgan suffered a setback shortly after lunch when Australian all-rounder Moises Henriques left the field clutching his side after bowling only nine overs and after dismissing England batsman Ravi Bopara for a duck.

"But Graeme Wagg then inspired a Glamorgan fight back as five wickets fell for just 13 runs and Wagg ending with 4-61."