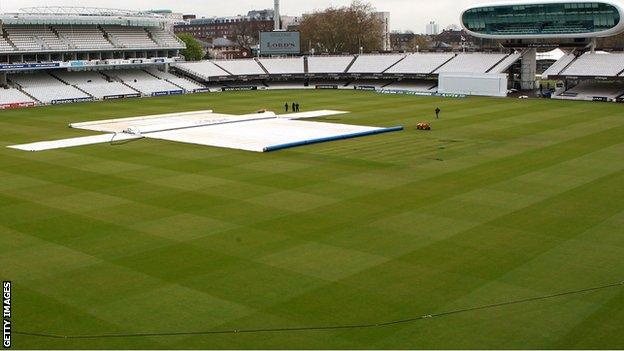 No play was possible on the opening day of the Championship match between Middlesex and Worcestershire at Lord's.

Overnight rain delayed the scheduled start, but conditions improved enough for umpires Nigel Cowley and Jeremy Lloyds to order play to begin at 1145.

But the weather deteriorated again and play was called off at 1650 BST.

It left England captain Andrew Strauss frustrated - he has a maximum of four Championship innings left ahead of the first Test with West Indies at Lord's.

"This was an enormously frustrating day for all concerned as there were times when it did seem as though there would be cricket.

"Worcestershire's director of cricket Steve Rhodes said the umpires' main concern was the bad light, rather than the conditions under foot.

"This was understandable as it was extremely gloomy for much of the day and the prospect of facing up to either Steve Finn or Richard Jones might not have filled too many batsmen with joy.

"So, the entire day was lost and the teams will return on Friday morning hoping the low cloud has lifted enough to allow play to start on time."