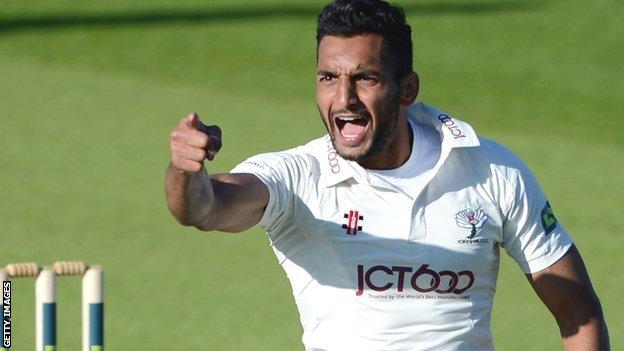 England fast bowler Ajmal Shahzad is to leave Yorkshire after being told he is free to find a new club.

The 26-year-old had played in all three of the side's County Championship Division Two matches this season.

They are, however, willing to let him if he can agree a full-time contract with another county or on loan.

Shahzad took four wickets in his only Test against Bangladesh in 2010 and club chairman Colin Graves said he was "disappointed" he would be leaving.

Explaning the decision to release the Huddersfield-born player, director of cricket Martyn Moxon said: "There has been a lot of discussion over a period of time with Ajmal regarding his cricket and it has been agreed by the club and the player that it is in the player's best interests that he pursues his career elsewhere."

As well as his one Test cap, Shahzad has also played 11 one-day internationals and three Twenty20 matches for England.

He was a member of the squad for last year's World Cup in India, Sri Lanka and Bangladesh but had to pull out of the tournament after suffering a hamstring injury in training.

The right-armer is capable of bowling at speeds in excess of 90mph and is certain to attract plenty of interest among other counties.

"I would like to thank both the staff and supporters of Yorkshire for all the help and encouragement that I have received since I joined the staff, and wish the club lots of success in the coming years.

"I am now looking forward to the next chapter in my career and hope to push for further honours within the game," he commented.