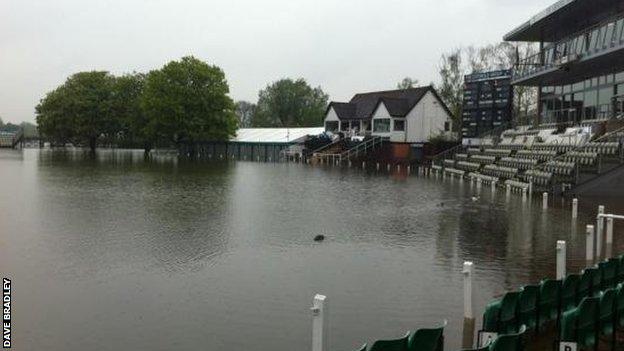 Flood-hit Worcestershire have been forced to return to their second home at Kidderminster for next week's County Championship home date with Surrey.

With half the playing surface on the pavilion side covered by water, the county have been forced to up sticks.

And they are now hoping to have New Road ready for the home Championship game with Sussex on 16 May.

"The standing water on the outfield is now receding, although slowly," said chief executive David Leatherdale.

"The flood levels at New Road, which peaked on Wednesday, are now starting to subside.

"But, with further rain forecast for early next week, in order to guarantee the best possible chance of playing the four-day match against Surrey, the match will be played at Kidderminster along with our CB40 one-day game against the Netherlands on Monday."

Fortunately, after Sunday's wash-out of the final day of their game against Nottinghamshire, Worcestershire were not at home this week.

But, although they were due to return to action on Thursday against Middlesex at Lord's, they were kept off the field all day due to bad light - the game not getting under way until Friday morning.

Director of cricket Steve Rhodes says that this week's continued foul weather in Worcester, to supplement the wettest April since records began, seriously hampered his team's preparations for the trip to Lord's.

"We tried to do some practice at Kidderminster but that was rained off," said Rhodes. "But we were been lucky to find some facilities at Radley College in Oxfordshire."

Worcestershire went into action at Lord's without batsman Alexei Kervezee, who has made just 26 runs in six first-class innings this season, giving Matt Pardoe his first game of 2012.