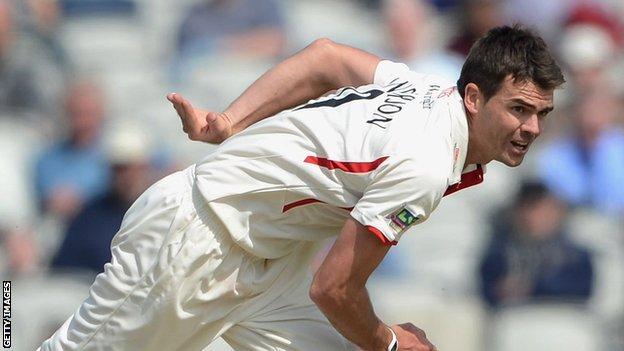 England pace bowler James Anderson has been given the all-clear after undergoing an X-ray on a thumb injury.

The 29-year-old was twice struck on the hand while fielding for Lancashire on the first morning of the game against Nottinghamshire at Old Trafford.

But the county champions said on Twitter there was "no break to his thumb" and later added: "Anderson has returned to the field."

England's first Test against West Indies at Lord's begins on 17 May.

Andrew Strauss's side play three Tests, three one-day internationals and one Twenty20 against the Windies, with five ODIs against Australia scheduled before the visit of South Africa.

Anderson, playing in first match since England's tour of Sri Lanka, is lining up against a Notts side which includes England team-mates Graeme Swann, Samit Patel and Stuart Broad, himself returning to action after a spell on the sidelines with a calf problem.

The right-armer had bowled 10 wicketless overs - conceding only eight runs - and showed no obvious signs of discomfort but, at the end of his spell, left the field and went to hospital as a precaution.

BBC Radio 5 live's Kevin Howells, who was at Old Trafford, said: "He was involved in an unusual dismissal when he parried the ball from gully over to third slip where the South African Ashwell Prince caught Michael Lumb.

"I understand it wasn't actually that incident that caused Anderson the problem, rather one a little bit later off his own bowling."