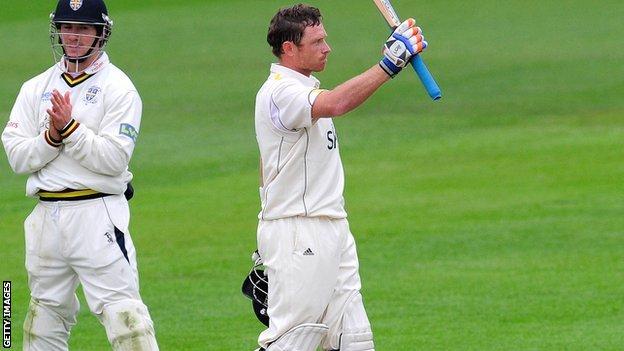 England batsman Ian Bell returned to form ahead of the Test series against West Indies later this month with an unbeaten century against Durham.

Bell, who resumed on 59 not out, ended a rain-affected day unbeaten on 106, hitting 14 fours and one six.

Tim Ambrose added 39 but was the first of two wickets in two balls for Ian Blackwell (2-45).

While other England players in Championship action have failed with the bat this week, Bell scored his first century since his at The Oval last August.

Only 22 overs were possible in the day but he eased to his 39th career first-class ton and his 19th for Warwickshire.

Bell and Ambrose put on 87 in 25 overs for the sixth wicket, before the latter fell to a unlucky dismissal.

Ambrose cut Blackwell but the ball ricocheted off the left thigh of Ben Stokes, who had just been positioned at silly point, to Michael di Venuto at slip.

The former England one-day player then trapped Rikki Clarke on the back foot, before Bell reached three figures from 198 balls in four-and-a-quarter hours, by cutting Blackwell to the boundary.