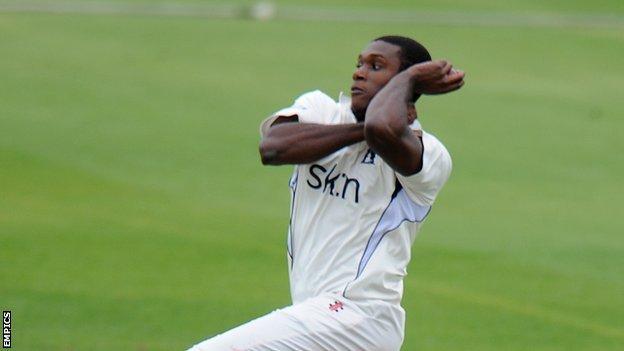 England batsman Ian Bell added 14 to his overnight score to reach 120 before being dismissed as the hosts, resuming on 195-7, were bowled out for 267.

But Durham were then dismissed for 139, Barker taking 5-37 to secure his maiden 10-wicket match haul, while Phil Mustard made 45 for the visitors.

The table-topping Bears then eased to a nine-wicket win, reaching 36-1.

Warwickshire, runners-up in 2011, have won three of their first four matches. But they now have a week off, after which they lose star duo Ian Bell and Jonathan Trott to England duty.

Warwickshire have found Durham a bogey team in recent seasons and this was their first Championship victory against them in six years, during which time they had suffered seven heavy defeats.

But this was a ruthless all-round performance which reinforced their position as the early-season pacesetters.

Left-armer Barker unsettled Durham with his pace and movement off the pitch and through the air, taking the first three wickets before returning to polish off the flimsy resistance after tea.