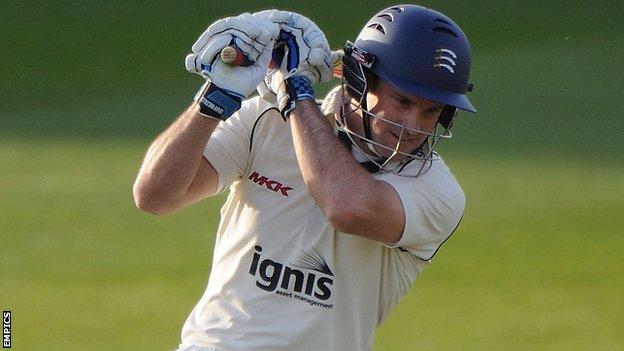 England captain Andrew Strauss fell one run short of a half-century as Middlesex reached 148-2 on a weather-hit second day against Worcestershire.

Strauss had been desperately looking for runs ahead of the forthcoming Test series against the West Indies, having hit just six in total against Durham.

He was almost dismissed for five but Michael Klinger dropped him at slip.

Strauss was finally trapped lbw by Aneesh Kapil having built an opening partnership of 80 with Sam Robson (59).

After day one was completely wiped out by the weather, further rain and bad light meant that only 40.3 overs were possible on the second day.

"Middlesex will be delighted with their position overnight, having lost the toss when play eventually got underway at the start of the second day.

"Andrew Strauss should have gone on five but Michael Klinger spilled a comfortable catch at third slip off the bowling of the luckless Alan Richardson.

"Strauss was dismissed one short of his 50 by a good ball that nipped back in an otherwise wayward first over from Aneesh Kapil.

"Richardson, a former Middlesex bowler, was a constant threat but bowled mostly without a support from the other end as Worcestershire were too short in their lengths to the delight of Strauss and Robson."

"After losing the whole of the first day to bad light, this was to prove another hugely frustrating day for all concerned.

"After being put into bat, Middlesex will certainly be the happier of the two teams after reaching 148-2 in 40.3 overs with Andrew Strauss and Sam Robson giving them a good platform in putting on 80 for the first wicket.

"Strauss was dropped when on five, but he played some nice shots in his innings, while Robson looked very assured.

"Alan Richardson and David Lucas kept at it for Worcestershire, but they will need quick wickets on the third morning if they are to wrestle back the initiative in this one."