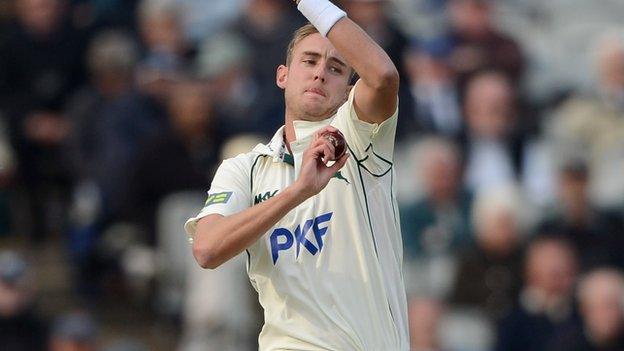 County champions Lancashire slipped to their third defeat in four games as Nottinghamshire completed victory by 185 runs at Old Trafford.

The hosts were up against it going into the final day after resuming on 39-5.

Luke Procter (41no) and Gareth Cross offered early resistance but Andre Adams (3-18) made the breakthrough to complete a 10-wicket match haul.

England's Stuart Broad, Graeme Swann and Samit Patel shared the last four wickets as Lancashire were 142 all out.

Victory was Nottinghamshire's third of the season, while Lancashire only have one draw to show for their efforts after completing a quarter of the County Championship season.

Lancashire resumed needing an unlikely 289 more runs to win but were bowled out before lunch.

Procter and Cross survived the opening 40 minutes of play before Adams trapped wicket-keeper Cross leg before to complete his sixth 10-wicket match haul in first-class cricket.

New Zealander Adams also had a hand in the next wicket, taking a comfortable catch at slip after a Broad delivery seemed to loop off Tom Smith's arm.

Procter and Glen Chapple - who launched Swann over mid-off for six - put on 39 for the eighth wicket before the England spinner got his revenge by bowling Lancashire captain Chapple.

Patel then wrapped things up by having James Anderson caught at slip by Alex Hales, before Simon Kerrigan chipped the slow left-armer to Broad at mid-on.

"Lancashire's first Championship game at Old Trafford since September 2010 ended as it did on that day with Nottinghamshire smiles.

"On that occasion Notts were crowned champions. This was not quite as historic but comprehensive nonetheless.

"It's three defeats in four games for the Red Rose, they can certainly feel a little bad luck conspired against them losing key players at important times during the game through illness and injury.

"But the facts don't lie. It's been a difficult start to their title defence and its doesn't get any easier with back-to-back away games coming up at Sussex and Warwickshire."