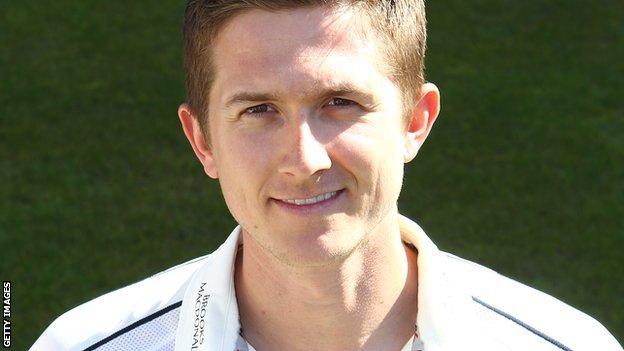 Joe Denly scored an unbeaten century but Middlesex and Worcestershire were once again frustrated by the weather.

Denly, who began the third day on 34, moved to 134 not out, his first ton for Middlesex, as they declared on 327-7 in between the rain showers at Lord's.

Alan Richardson finished with figures of 5-89, the 17th five-wicket haul of his first-class career.

Worcestershire closed on 45-2 in reply, 282 runs behind, with Tim Murtagh and Toby Roland-Jones taking a wicket each.

Richardson was then rewarded for a good start to the day with two wickets in successive balls.

First Dawid Malan sliced to slip, where Vikram Solanki took the catch, and then Neil Dexter shouldered arms and lost his off stump.

Only 40 overs were possible in the first two days, and light rain set in again 45 minutes before the scheduled lunch to send the players off again.

Denly and Gareth Berg (36) put on 88 in 21 overs for the seventh wicket, and Denly reached a 153-ball hundred with two on-driven fours in three balls off the wayward Richard Jones.

Berg then became Richardson's fifth victim against his former team-mates, a third catch behind for Scott.

Daryl Mitchell and Michael Klinger put on 39 for the first wicket but both fell within three overs, and the players went off for bad light before new man Moeen Ali could even face a ball.

"Joe Denly scored a superb century to guide Middlesex to a more than respectable total at this stage of the season.

"Alan Richardson was again a star performer for Worcestershire and more than deserved his five-wicket haul. David Lucas improved his consistency, but again the support wasn't of a sufficient standard for Richardson's efforts.

"The Worcestershire opening batsmen played extremely well to keep Steven Finn and Tim Murtagh at bay for an hour, but both fell before bad light brought an early close.

"The weather-affected game is almost certainly destined for a draw, unless Worcestershire collapse short of the follow-on target on the final morning."

"Once again, rain and bad light had a large say in the day's proceedings in what has been a frustrating match for both sides.

"Joe Denly batted really well for Middlesex and thoroughly deserved his century, while Alan Richardson's five-wicket haul was the least he deserved for another accomplished performance for Worcestershire.

"David Lucas bowled better than his figures might suggest, while Michael Klinger can consider himself unlucky to be dismissed from the final ball before the umpires took the players off for bad light.

"But it is going to take a dramatic batting collapse from Worcestershire in the morning for the game to end in anything else other than a draw."